Kacha, the son of  Brahaspathi, the priest of the Devas also an ascetic joins as a disciple with  Asura guru Sukracharya to learn the Sanjeevini Mantra. Devayani, the daughter of  Sukracharya, falls in love with Kacha.  The acceptance of Kacha as a disciple by the Asura guru ignited aversion among Asuras. They conceived.plot to kill Kachan. The poor Kachan was massacred twice. Upon the appeal of Devayani the disciple was brought alive by  Sukracharya by chanting the divine Mantra. On the third occasion, Asuras worked out well.  T his ascetic was not only butchered but also burnt into ashes. Sukracharya unknowingly consumed his alcoholic drink blended with ashes.  How Kacha was brought alive? Whether Kacha learned the Mantra? What happened to Devayani - Kacha love story? Read this kids story to find the answer to the questions. Leave your comments.

In older times, Gods (Devas) and Demons (Asuras) wanted to rule three worlds (Netherworld (Pataal), Earth (Prithvi), and Heaven (Devalokam). For this very reason, there was heavy competition among these two. contending factions.  Angiras or Brahaspati was the guiding spirit for Devas. Asuras also accepted Bhargav Sukracharya as their pathfinder. Sukracharya, the priest of the Asuras,  was proficient in ‘Sanjeevani Mantra.’ With the chanting of this mantra, Sukracharya could bring back life into the Asuras who died in the war field and make them invigorating again. Several Asuras found dead in Deva-Asura wars. Sukracharya used to chant Sanjeevani Mantra to resurrect dead Asuras. The Sanjeevini Mantra was making Asuras tough and capable.  They were not facing any casualties.

Brahaspati does not know Sanjeevani Mantra Therefore, Devas met heavy casualties and suffering from the debacle.   Devas wanted to avert casualties. Brahaspati decided that somebody from Deva camp would have to go Asura guru to learn Sanjeevini Mantra.   Kacha (later he became Kacha Maharishi) was the son of Brahaspati. Devas approached Kacha and represented their grievances. The mantra was not known to any Deva. Kacha felt the value of this Mantra. He wanted to learn the same from Sukracharya. He traveled to  Vrishparva, where Shukracharya had his hermitage. He approached the Asura guru and conveyed his intention politely. Finally, the guru was pleased with the humility of Kacha and accepted him as his disciple. The Asuras have learned the purposes on which Kacha came to Sukracharya's hermitage.  The acceptance of Kacha as his disciple by the Asura guru ignited aversion among Asuras. Asuras also did not prefer Kacha learning Sanjeevini Mantra from the Lord of Asuras. .Devayani is the daughter of Sukracharya. She was very much in adoration with Kacha. But Kacha observed severe celibacy. He served his guru with devotion.

One day Kacha was gazing the cattle in the grazing field. Asuras came there and massacred Kacha into pieces. The flesh pieces were fed to the wolves. In the evening cattle alone returned home without Kacha. Devayani was worried about the absence of Kacha. She also briefed the same to her father. She pressed her father to save Kacha's life. Sukracharya visualized that Kacha was massacred by Asuras. He chanted the Sanjeevini Mantra and resurrected Kacha.

Asuras realized about Kacha's resurrection. They were expecting for another occasion. One day Kacha went to the garden to pluck flowers for Devayani. This time Kacha was butchered by them The body was minced into fine pieces and immersed in the ocean. Devayani was panic-stricken about Kacha's absence; She also pressed her father to do the necessitous. With the chanting of the Mantra, Sukracharya resurrected Kacha from the ocean.

Still, Asuras never leave off. In the third time, they made a conspiracy. They liquidated Kacha and burnt the body into ashes. They also blended the ashes into alcohol (divine liquor) and made Sukracharya drink. Asura guru also happily consumed this uncommon drink. Devayani also perturbed habitually. She also supplicated her father to resurrect Kacha.

Sukrachariar chanted the Mantra which would bring Kacha to life. Kacha appealed his guru that he remains inside the abdomen of Shukracharya and conveyed his difficulty in getting out from there. He also pleaded him salvage his life. The voice came from the guru’s abdomen. Guru was bewildered by hearing Kacha’s voice. He assumed the plot played by Asuras. He was guilty of being hoodwinked by Asuras. 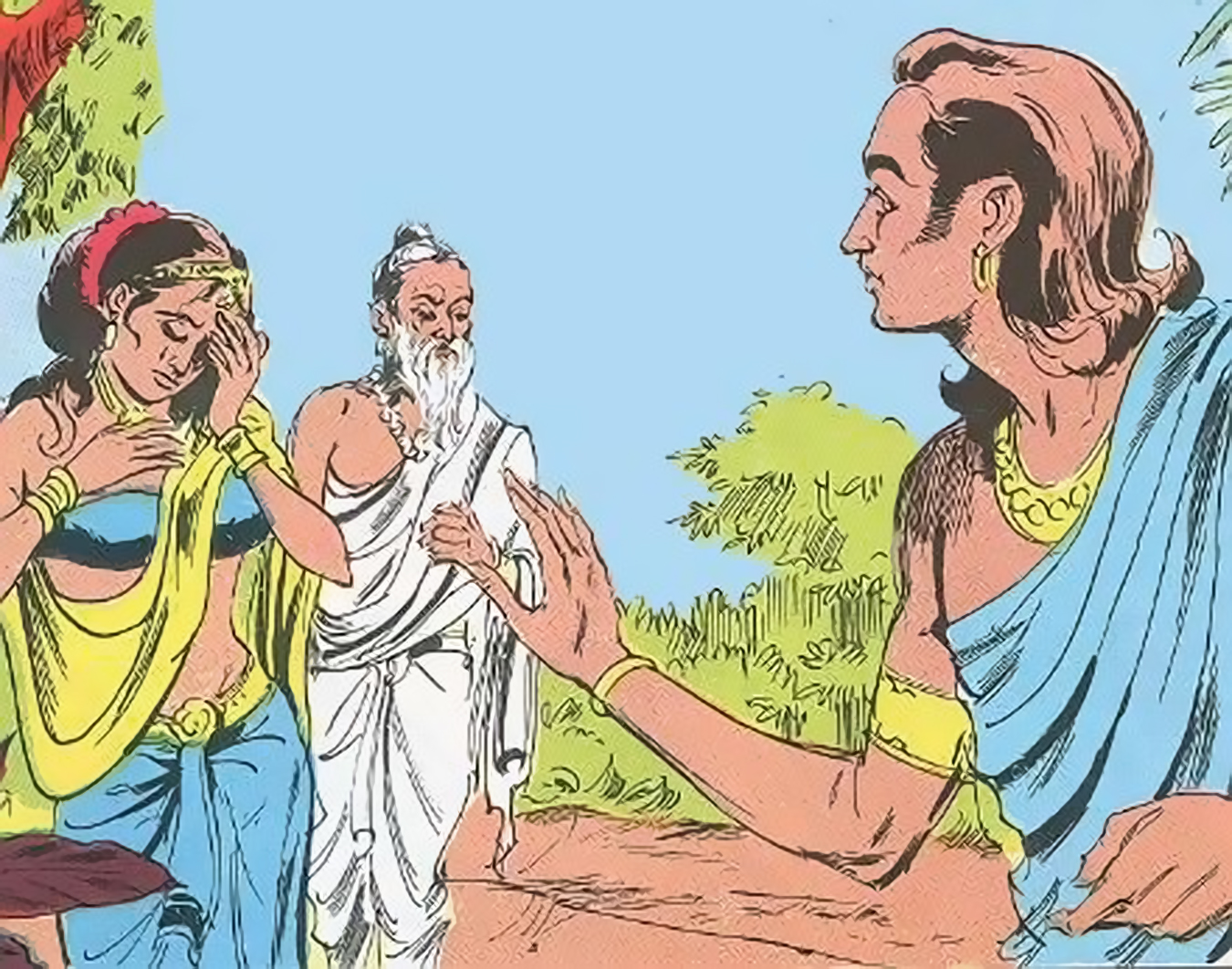 Devayani wanted to espouse Kacha. She craved him to renounce his celibacy and accept for their wedlock.

Guru preached  Mantra to Kacha, therefore, he becomes his father. Kacha came out alive from his womb. Hence he becomes his mother. In short, guru also becomes his father as well as his mother. Devayani becomes his sister. In view of this, he said to Devayani, I cannot marry you as you are my sister.
.
Devyani was agonized and outraged at Kacha's defiance. Therefore she cursed him saying that all the learning that he had acquired from his guru would be of no use to him. Since Kacha inadvertently hurt Devayani, he accepted her curses painfully. However, he said that he would teach Devas what he has learned. What I have learned from my guru would be beneficial for Devas. They would use it for the benefit of others. He also said that Devayani never considers that an ascetic like him was bound by certain regulations. She even went to the extent of cursing him. Consequently, Kacha also cursed her  He said that no Brahmin would marry her. Only a Warrior (Chatriya) would marry her

He submitted his prayers to his guru. Guru accepted his views and allowed him to leave for heaven (his place).

Posted by iramuthusamy@gmail.com at 4:03 AM