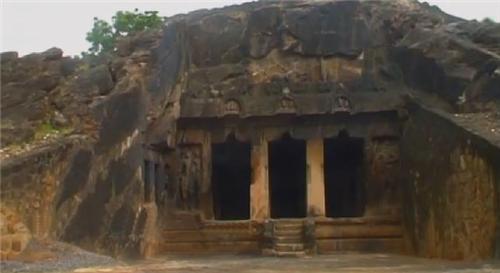 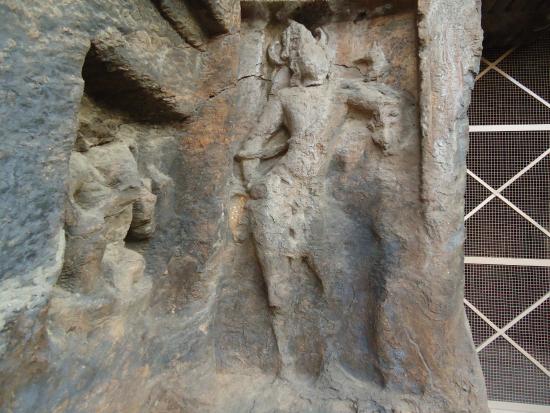 Mogalarajapuram caves is located in the middle of the city of Vijayawada at "Kasthuribaipet", Krishna District, Andhra Pradesh, India PIN 522502. The geographical coordinates of Mogalarajapuram are 16° 30' North (Latitude) (16.5089) , 80° 37' East (Longitude) (80.6452).  It has an average elevation of 6 m (19 ft). Some historians believe that Mogalarajapuram  caves are datable to early 5th century A.D.  The cave is protected by Archaeological Survey of India (ASI).  The caves are in ruins yet it is worth visit.

The Mogalarajapuram five rock cut sanctums are the unexplored places in Andhra Pradesh.  .  The cave temples are located on the hillock..  The rock-cut cave has a facade, mukha mandapam and sanctum cells. The facade of the cave has been cut inwards. The conspicuous components of Mogalrajpuram cave adhishtana (basement) are upanam, kantha, vritta kumuda and pattika. The front facade is supported on two pillars thus forming three spaces between pillars (anganas).  The  anganas in the facade are almost equal. The middle angana forms the entrance to the cave with the flight of three-step staircase in middle front of the cave with balustrades on either sides.  The pillars are in usual early rock-cut cave style, cubical top and bottom (Brahma kanta) with intermediate octagonal shaft (Vishnu kanta). . Above the two pillars there are vettu potika (corbel bracket) holding the overhanging cornice (kapota) with three kudu decorations. One of the kudu is adorned with miniatures of  Trinity image..

The side niches have the bas relief images of two dvarapalakas (door guards), one on each side of the outer wall of the cave. The external rock slope outside the cave temple bears two koshtas
The bas relief image of Ardhanarishwara at the centre cave of Mogalarajapuram is considered as the best sculptural depiction and the unique image is only one of its kind in south India. Ardhanarishwara, an androgynous Hindu form, is composed of Lord Shiva and his consort goddess Parvati (Shakthi). The distinct Hindu deity illustrates half male and half female split down the middle. The female principle of goddess Parvati is inseparable from the male principle Lord Shiva. The sculptural depiction of Ardhanarishwara represents the synthesis masculine and feminine energies.

Another cave bear the images of  Lord Nataraja and Lord Vinayaka. Lord Nataraja (Lord Shiva) is illustrated as the source of all movement within the cosmos. The icon represents by the arch of flames.  The Lord carry out his ‘Tandavam’ (divine dance) to spifflicate the aweary universe and to recreate it back..Lord Ganesha aka Vinayaka emerged as a distinct deity in the 4th and 5th centuries A.D., during the Gupta period  The bas relief image of Lord Vinayaka dating back to the 5th century A.D. is unique.


How to get there?

Posted by iramuthusamy@gmail.com at 9:22 AM No comments: